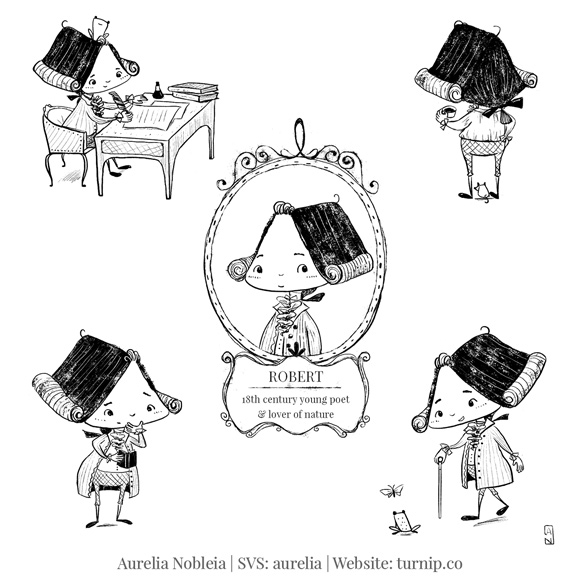 I designed this Inktober character for the September SVS contest. Can you tell I’m quite into Victorian era apparels? It’s fun to draw. 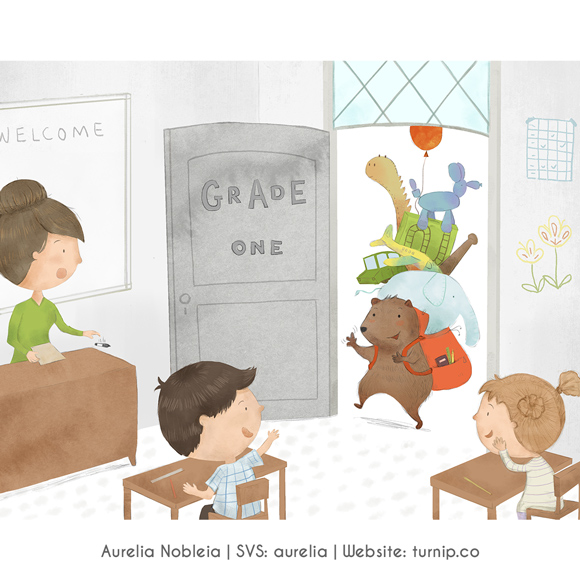 Our fun-loving Albert needs to go school now. It is his first day of school, and he is not sure what will happen there. He plans to bring all his toys with him. “After all we’re going there to play, aren’t we?” thinks Albert.
I submitted this for an SVS children’s book illustration contest. It reached the finals. 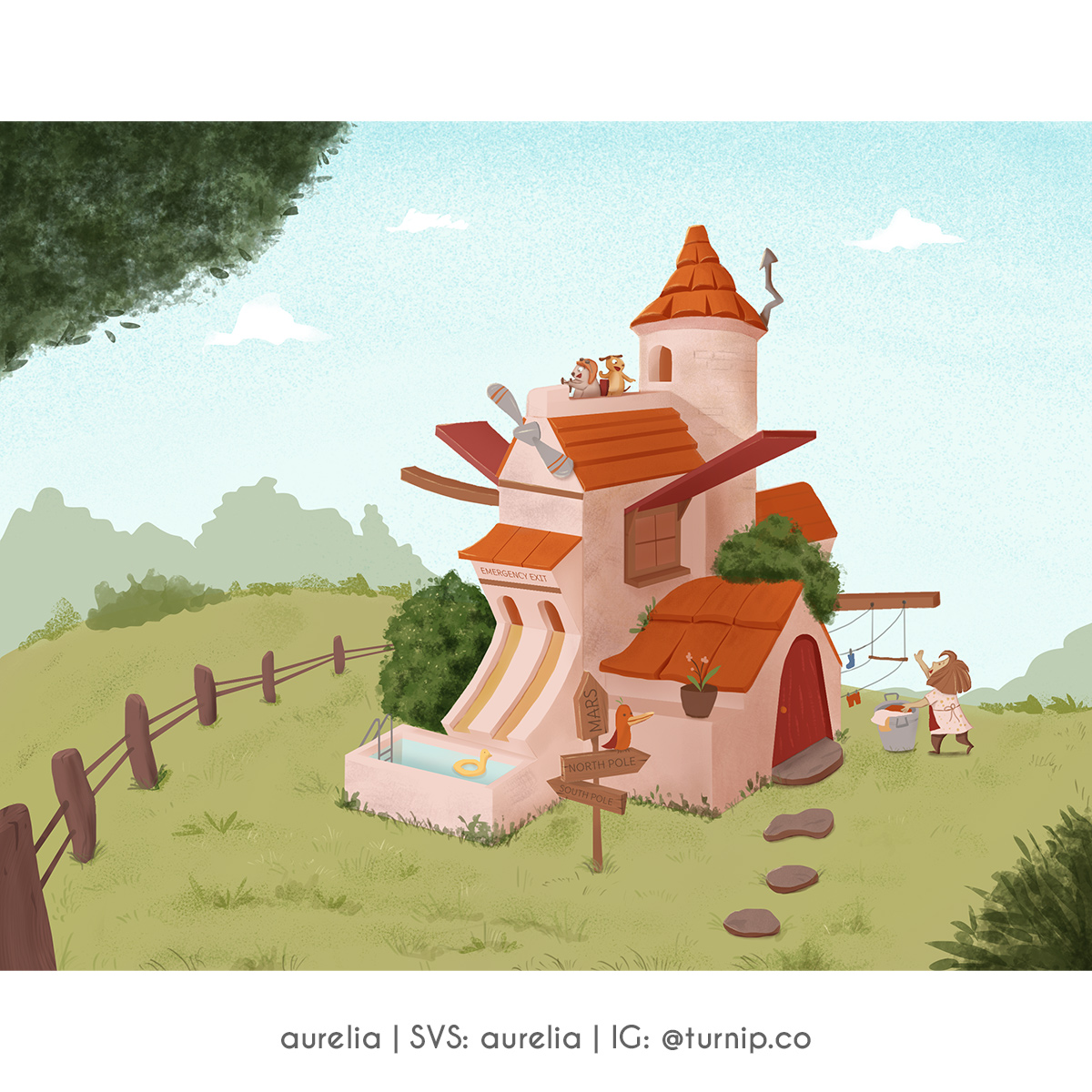 What kind of home is suitable for Albert the groundhog who loves flying? A house with airplane wings of course! I added a swimming pool as a emergency exit for fun. 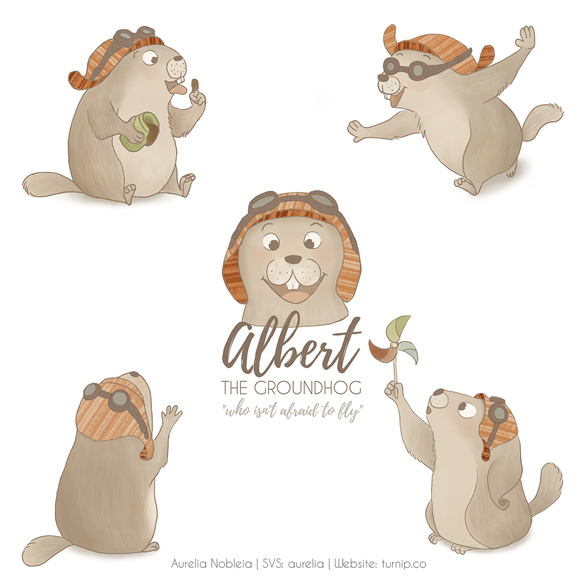 I illustrated a character design of a cute groundhog who dreams of flying.

I submitted this for a contest in June. It reached quarter finals.

In the depths of Noble Bunny Manor…

Made of wood, the door handle has long become rusty. It is apparent that this door has not been in use for a long time.

It’s a door that I never open.

Nor does my hubby open it.

But you may be wondering:

And the answer to that may shock you.

But that’s not all that’s in the room.

Originally, the room was meant as a substitute attic (since we don’t have an attic), and was used to store antique furniture that we never used.

That furniture is still in that room today.

Since the furniture is antique, could they be possibly worth a lot?

Because… over the years… because of disuse… too many spiders started taking over the room.

And since we’re scared of most bugs, eventually there was no one brave enough to open the door and take the furniture out for appraisal.

So within that room…

Because no one is brave enough to open the door and check.

But one thing’s for sure:

If you ever visit my store, and you notice me selling furniture there…

Have you ever slaved away for hours, and days, and weeks, and months over a single project…

… and you put it out to the world, maybe in your store…

… and all you hear is crickets?

While on the other hand:

Sometimes you just sloppily release something quick for fun, and put it out there.

And it becomes an almost instant bestseller.

Ever had that happen to you?

Yeah, it happens to me a lot.

But this always reminds me that it’s not about how much effort you put into a piece. Sometimes, for some reason, things just click.

And sometimes they don’t.

It reminds me of a talk by world famous music entrepreneur, Derek Sivers.

In the talk, he mentions how when he first got started in his career as a musician, he released albums of his songs, and did everything he could to get his music famous. He performed live events, knocked on doors, made connections, did all the marketing he could.

Until one day, he decided to just throw in the towel.

And switch to a new project.

Within days of that new beginning?

People kept throwing money at him. Non-stop. For years. And his new musical project, a website called CD Baby, became known throughout the world.

We are often told that we should persist, keep on going, and never give up. But it’s not about persistently and stubbornly doing the same things over and over again. In the words of Einstein, that would be insanity.

Rather, it’s about persistently experimenting and improving until you get the results you want.

So if you’re putting your work out there…

… and you’re not getting the attention you want…

… and all you hear is crickets…

Maybe even a new project.

In the words of well-known Disney and National Geographic artist Lee White:

P.S. This masterpiece has been one of my most recent overnight bestsellers. I really enjoyed making it. But never expected the response I’ve been getting. Wow!

A couple days ago, I was watching an interview with best-selling novelist Stephen King.

I hate anything horror.

… I haven’t read any of his books.

But, I’m always open to learning from the greatest artists of any field.

King talked about the importance of finding (and working with) ideas you enjoy.

He mentioned how a lot of people approach their craft with the intention of making stuff that OTHER people will like. Then, they try to finish that work as quickly as possible. So that they can breathe a sigh of relief once they’re finally done.

But King doesn’t approach his work that way.

He doesn’t CARE about the end result… at all…

… or even what other people think of his work.

The finished book on a shelf is just a pile of dead skin to him. So it isn’t about authoring yet another book.

All that matters to him is that he finds enjoyment in the process of creation.

And he always does.

In fact, he enjoys it so much that…

… by the time a book is finished…

… and he wishes it wouldn’t end.

Thinking back, there are times when I’ve fallen into this sort of trap. Where I forget to enjoy myself when creating art, and I just wanna get the job over with as soon as possible.

So I can move onto the next project.

And I focus too much on what other people will think of my work.

But now that I think of it, those are the times when the work I create isn’t that great.

Why does this happen?

I believe the answer lies in a story I read sometime back from a well-known Olympic coach.

One of his track athletes came up to him and said…

"Coach, I gotta win that race that’s coming up."

"Alright. We’ll do some special training just for you today. For this first practice lap, I want you to put 100% of your effort in! Run as fast as you can! I wanna see you at your best!"

And so, the athlete got the message.

He went up on the field.

The time he recorded was… mediocre.

Hearing the result, he walked back to his coach with his head down in shame, waiting for feedback.

After which, his coach told him:

"Alright, let’s try this again. This time, I want you to go onto the field, and just forget about running your fastest. Just put in 50% of your effort this time. Alright?"

The athlete was puzzled.

But he went back up on the field. And did what his coach told him.

He ran SO fast, that…

… he unofficially broke a World Record!

When you focus too much on the end result, it really messes you up. You strain yourself so much, your performance goes bad.

You start to get nervous.

Your mind and muscles tense up.

Self-doubt starts to rear its head.

And everything just goes haywire.

So it goes for the creative professional…

As Stephen King says (and I paraphrase):

"I don’t care about whether other people like what I create. All I care about is that I have fun and enjoy the process. And if people have fun reading what I write, then that’s great."

And don’t focus too much on the end result.

That’s why these days, I’m spending more time on just playing around with my work. Not doing it just for the sake of reaching a specific goal.

And that’s also why…

… these days you’ll find a lot of fun new pieces in my store.

I don’t know. But I know one thing.

I had fun making them.

And to me, that’s all that matters…